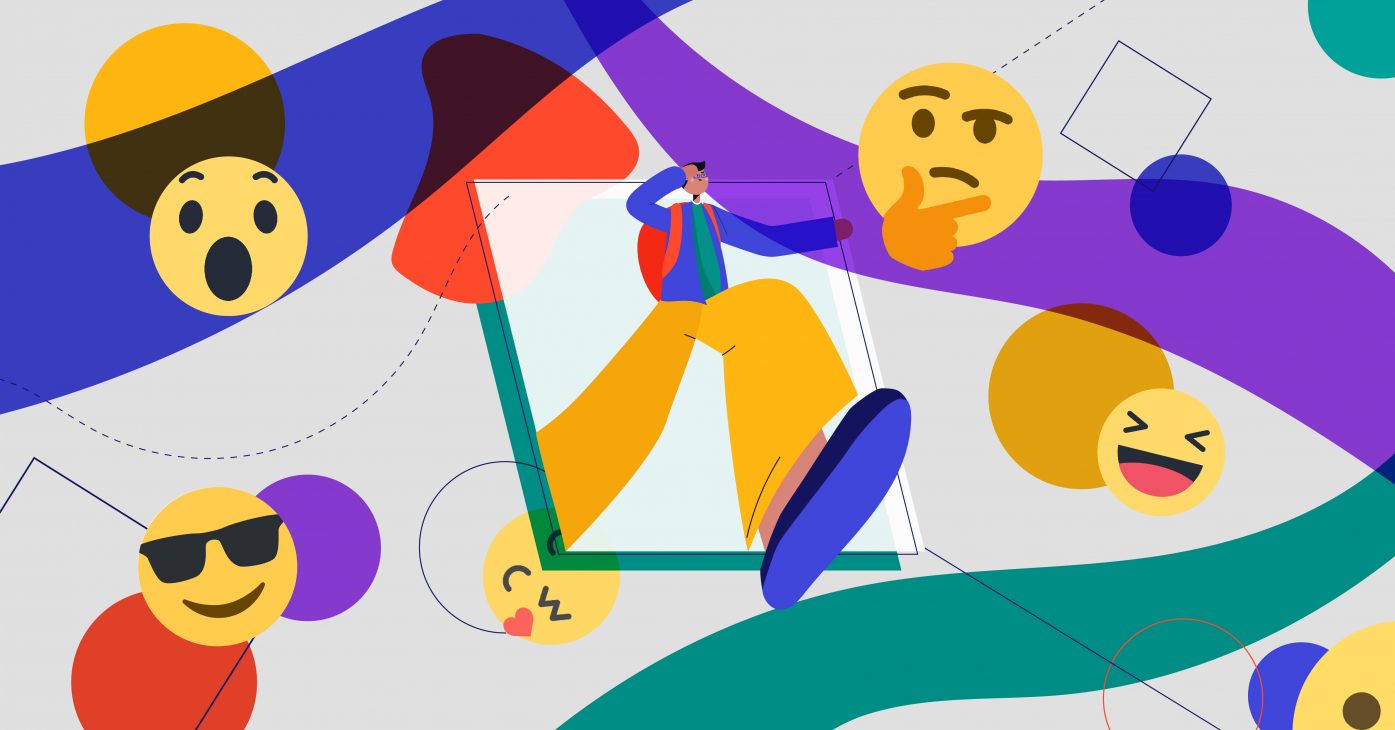 Studying the Phenomenon of Emoji: Are We Shifting Towards the Future of Visual Communication?

Emojis changed the way we communicate and express feelings – but how do they influence your business?

Back in the day, emojis (or emoticons) were little more than a smiley face stuck on the end of a text message between friends.

However, as the digital world evolved, so did emojis. Today, they’re crucial little helpers that help us convey complex emotions across text, save us time, show sarcasm, reduce the risk of miscommunication, and even avoid potential conflict.

But what can businesses and their marketing departments learn from the cult of emoji? Most importantly, they support a clear trend away from tedious, plain statement-based conversation in favour of exciting, diverse visual communication.

According to an article published by Adweek, 92% of online populations use emojis daily, with over 10 billions of them being sent every day! This goes to show how “a single image often conveys a complex thought better than a series of winding, hard-to-follow sentences*”. [source]

Judging by the booming popularity of emojis, we thought it time to ask – is business communication also shifting towards visual language?

A short introduction to the history of emojis

Emojis – from Japanese: “e” (picture) and “mojis” (characters) – were first introduced in 1998 by Shigetaka Kurita, an engineer at the Japanese phone company, NTT Docomo.

At that time Kuriata was working on the development team for “i-mode”, where he was tasked with designing an appealing interface that conveys information in a simple, succinct way.

The final result was quite outstanding – Kuriata has eventually delivered a set of original 176 tiny visual graphics, marking this event as a breakthrough development in digital communication.

At time of writing, there are 3,304 emojis in the Unicode Standard, with 117 announced to make their final cut for release later this year.

The vocabulary of emojis is continuously evolving with each one portraying a pallet of emotions behind their meaning. Emojis activate empathy (well, the Internet’s empathy anyway), and they are widely used to improve communication in areas where emotions are important, such as expressing a web user’s feelings or reaction to content published on social media.

A great example of the above are reactions, Facebook’s line-up of emoji that allow you to react to posts with seven different animated emotions: Love, Haha, Wow, Sad, Care, Angry, and, the classic: Like, introduced back in 2015.

Rolling out reactions across this social networking platform was a significant milestone for Facebook as they complemented Facebook’s flagship feature – the Like button. Upon the famous release of reactions, Mark Zuckerberg commented:

Not just a pretty face!

The key to understanding the success of emojis is to discover their semiotics. Although those tiny pictographs have emerged as a form of a universal language for digital communities to reflect obvious feelings, many of them harbour hidden alternate meanings…

? Goat:  Admit it – you’d never guess this! The goat emoji, despite the popular belief, isn’t just the representation of a cute, farmyard animal. In the emoji language, the goat stands for the acronym GOAT: Greatest of All Time! So next time someone sends it to you, don’t feel insulted. 😉

? Octopus: Just received a text containing THIS and not sure how to feel about it? Well, consider yourself lucky; according to Best Life Online, this little guy stands for a virtual hug!

?‍♀️ Woman Tipping Hand: Although this emoji is often mistakenly used to illustrate customer service, it has a totally different meaning (and it even amazed us!). A woman tipping hand emoji actually stands for “I don’t even know what to think anymore”. We’ve all been there, sis!

? Avocado: Given millennials’ apparent obsession with this trendy fruit, you’d think that the avocado emoji represents a healthy lifestyle. Well, think again! The actual meaning behind avocado isn’t even associated with nutritious food; apparently, all it does is indicate that someone is hopelessly “basic” and just does whatever is fashionable.

The power of visual communication in the digital age

Today it is estimated that more than 700 million emojis are used every day in Facebook posts alone. Unsurprisingly, New Year’s Eve is the most popular day to use them, according to the social network. The most popular emoji on Facebook, as well as on Twitter, is the “laughing face with tears of joy” (my personal favourite), as it is officially called, while the heart emoji reigns supreme on  Instagram.

Facebook reactions have been a roaring success judging by their popularity. Reactions were used over  300 billion times during their first year of existence. That’s 800 million a day!

This insanely large number should come as no surprise since reactions have become a convenient part of people’s everyday usage, just like emoji.

And if you are still unsure about the impact emojis have made on digital communication, let’s look at it from this perspective – The Oxford English Dictionary named “crying face” emoji the word of the year in 2015. Yep, ‘word’ of the year. ?

Given the popularity of emojis, it comes as no surprise that visual language has a substantial impact on how target audiences react to brand messages received via digital channels.

But don’t just take our word for it:

The instant impact of visual comms allows your content to cut through the noise, which is vital in times where the average consumer spends more than a quarter of the day engaging with digital content.

First things first – the human brain processes visual information much faster than text. In fact, 90% of information that comes to the mind is visual, so it makes sense that visual content would have more “sticking” power with audiences than plain text.

According to a report published by Corporate Executive Board called “From Promotion to Emotion”, 86% of buyers believe that brands are selling the same stuff and that their unique value propositions are in fact not-so-unique. So, they sound like this:

However, brands that connect with customers on an emotional level by enriching their communications with visuals will see 2x more impact compare to those trying to sell based on functional value alone!

Have emojis started a trend in visual communication?

Using emojis and other visual alternatives to communicate our thoughts has become an integral part of digital communication, which must always be fast, simple and effective by design.

But there is something else –

Visuals are a universal tool that help to broadcast our message to global, multilingual audiences, helping them understand and sympathise with it.

When it comes to business communication, adding a graphic aspect to plain text communication can add life to your data and creates a story people care about.

With the growing amount of content marketing pieces available across the web and far less time to capture your audience’s attention (you have only 8 seconds!), it’s harder than ever to stand out with just written copy.

Text isn’t good enough. Instead, complex feelings, data or products can and should now be communicated through both static and moving images such as explainer videos or animated brand films to make sure they deliver a significant impact and leave a long-lasting impression on your audience.

Get in touch with our team today to discuss your next social media campaign!

Have some thoughts about the future of digital comms? Join our marketing group on Facebook and start a discussion!

Are You Struggling to Boost Social Media Engagement? This Content Will Help

Explainer Videos for Business: Everything You Need to Know